At the end of the 19th century, illustrator Thomas Nast popularized our current version of Santa Claus: a fat, jolly man with a white beard and a red suit who lives at the North Pole. Nast’s cartoons in publications like Harper’s Weekly also helped spread the idea of sending St. Nick mail. By the late 1870s, American children had begun mailing their Christmas wish lists to Santa, but the Post Office considered these letters undeliverable. Around this time, newspapers began prompting children to send wish lists to them, which would then be published so that Santa (and parents) could read the letters all in one place. We’ve collected 23 funny historical letters from children to Santa Claus, as printed in newspapers across the U.S.

Conrad tries to mask his violent tendencies by interspersing the weapons between non-threatening gifts, but he shows his hand with that threat at the end. 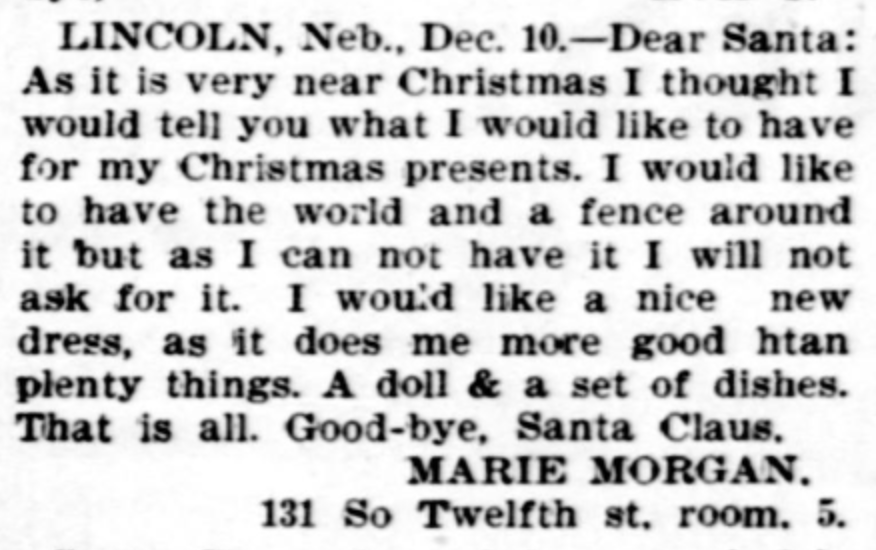 “I smashed everything you sent me last year." I won’t tell you what I want this year, but you better not mess up. 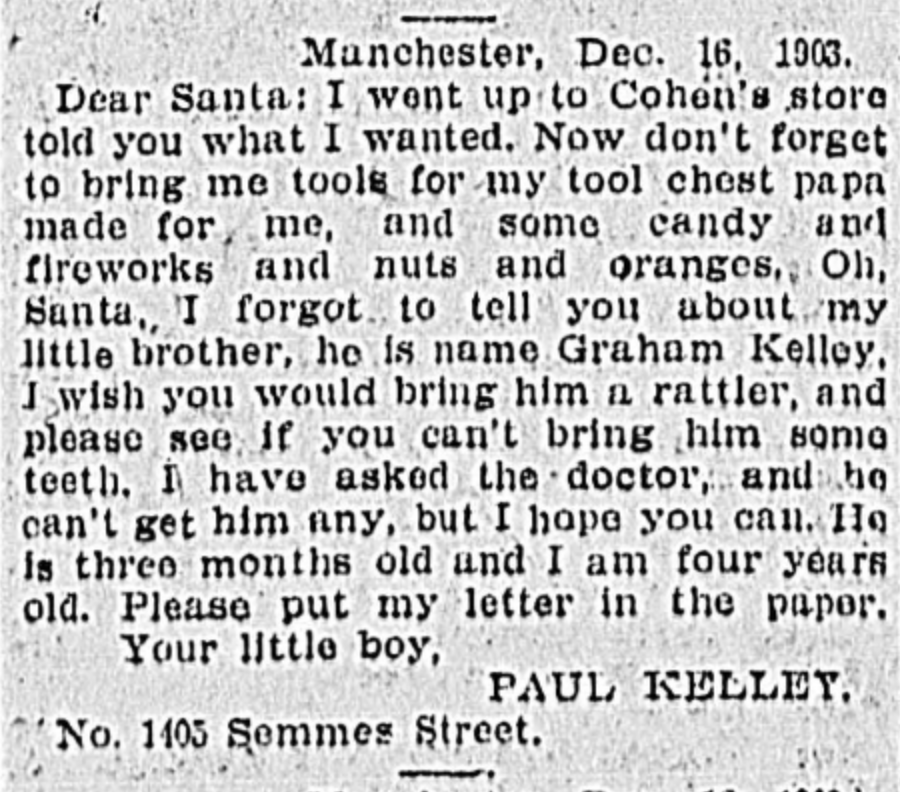 This 4-year-old is very concerned about his infant brother’s lack of teeth. Since the local doctor has proved useless to rectify the situation, Paul hopes Santa might be able to lend a hand. He is magical, after all.

Who knew keeping your feet dry was such an important part of staying off the Naughty list? 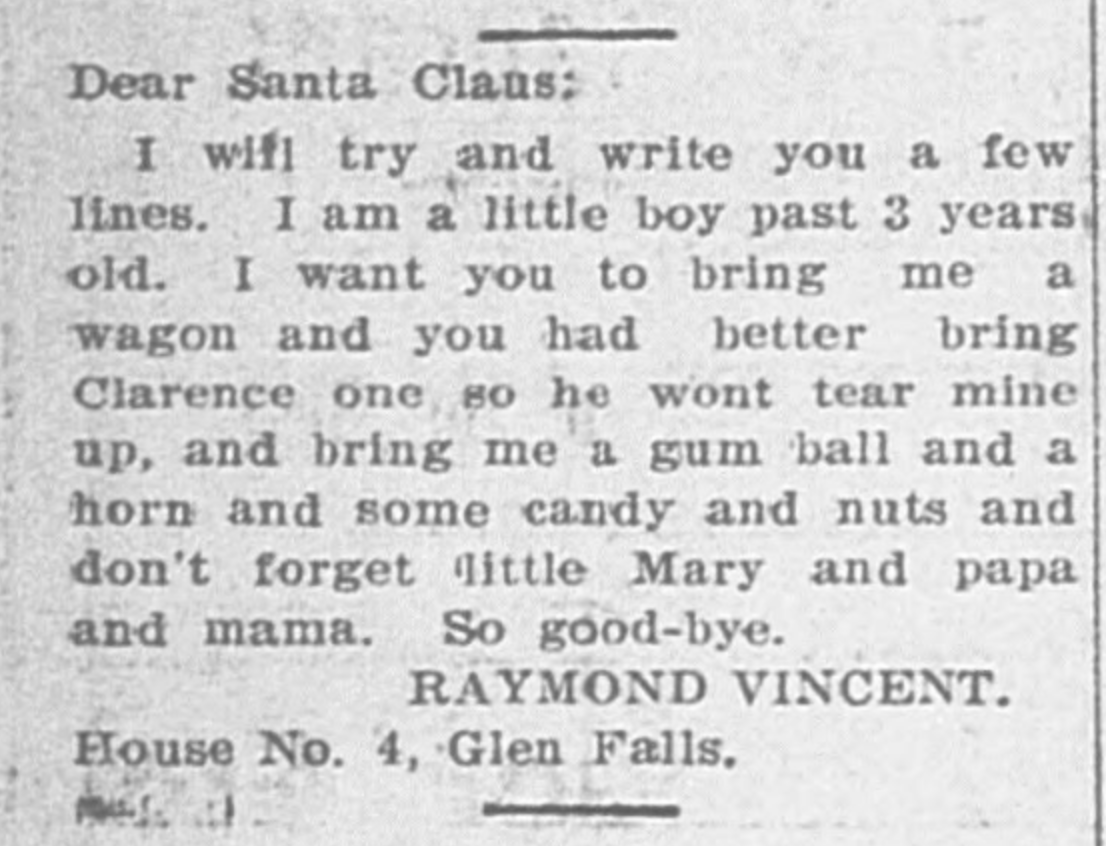 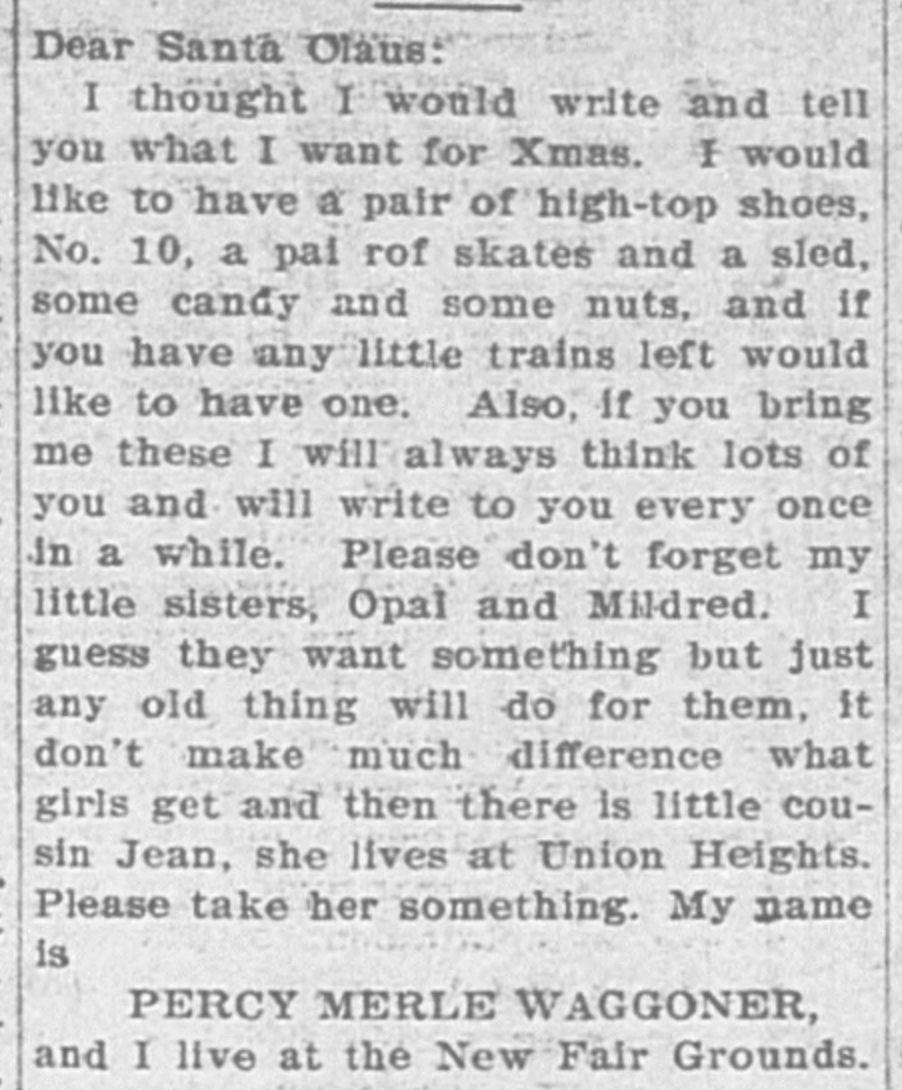 Poor Opal and Mildred. They’re just girls. Do girls even have preferences? 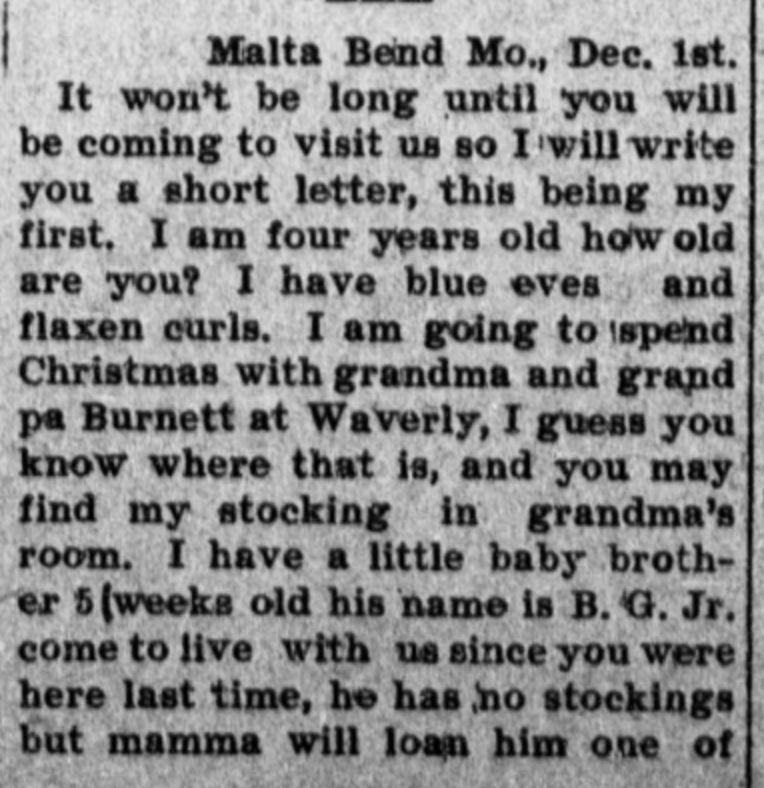 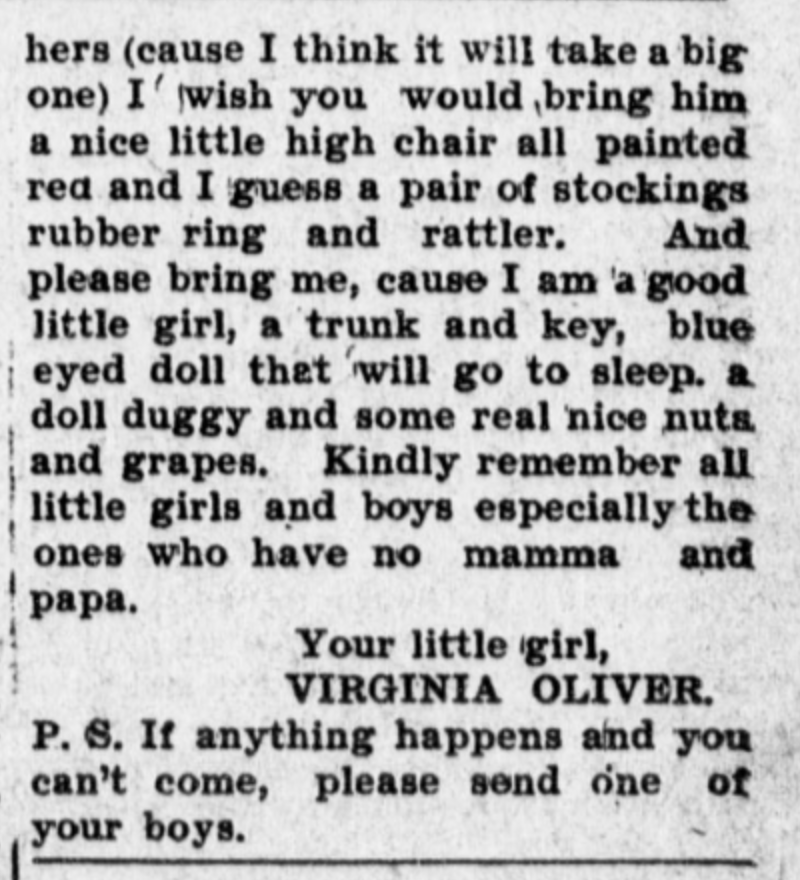 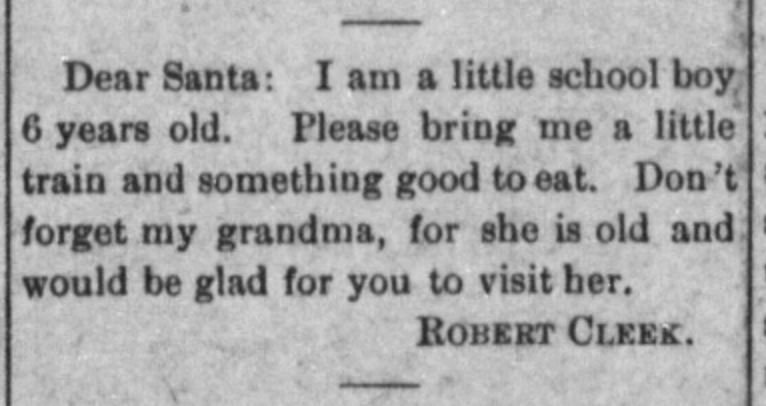 Sure, an axe sounds like an age-appropriate gift for a five-year-old. 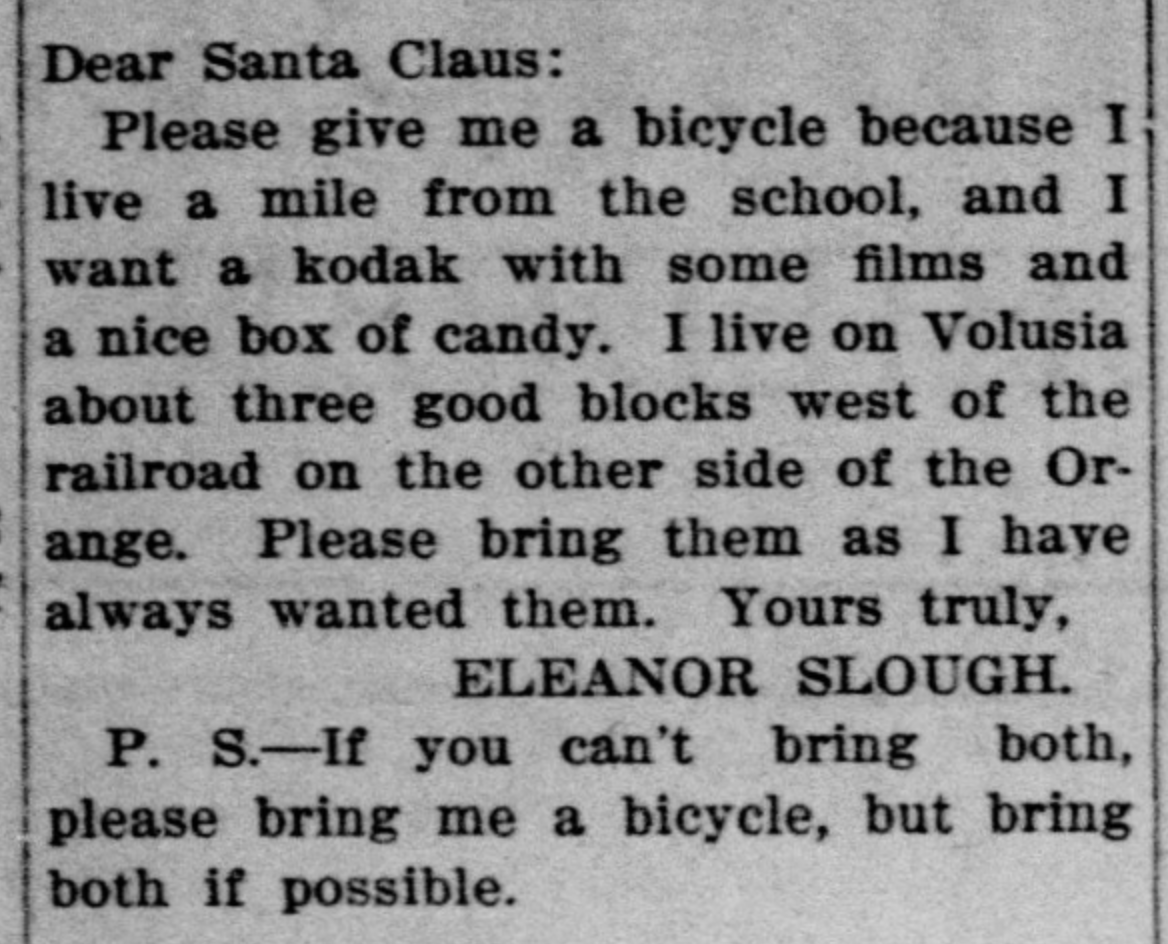 “Bring both if possible.” 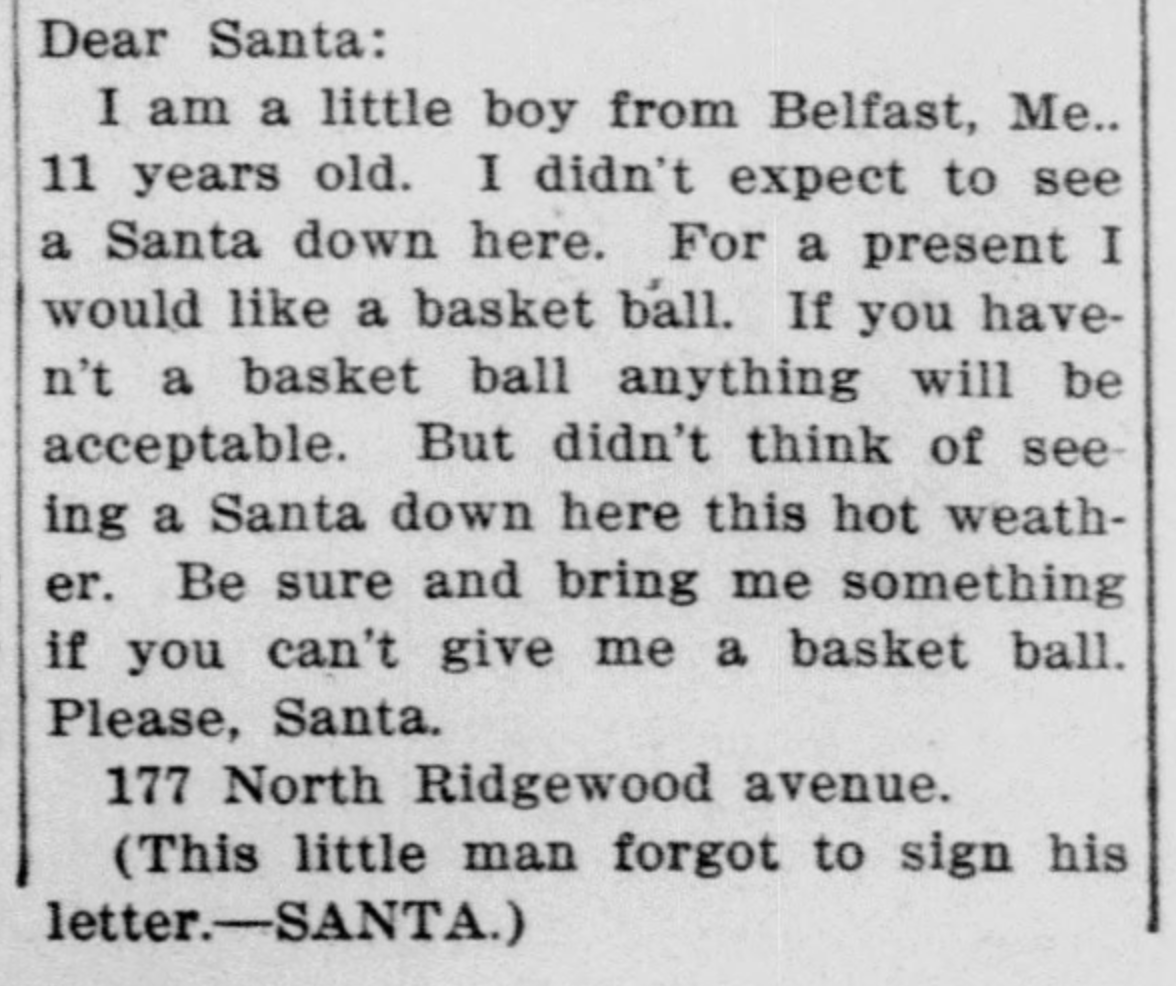 This transplant from Maine would really like a basketball, but he doesn’t quite believe that a Santa Claus can exist in Florida, where there isn’t even any snow. 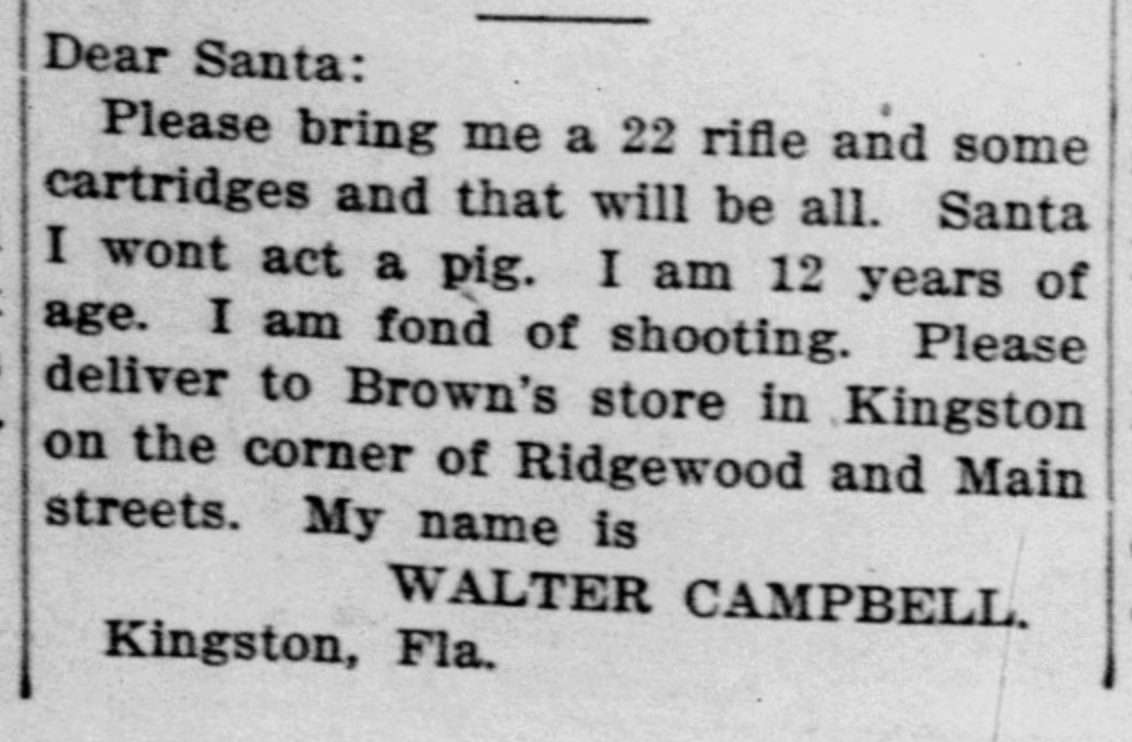 Good choice not to act a pig, Walter. 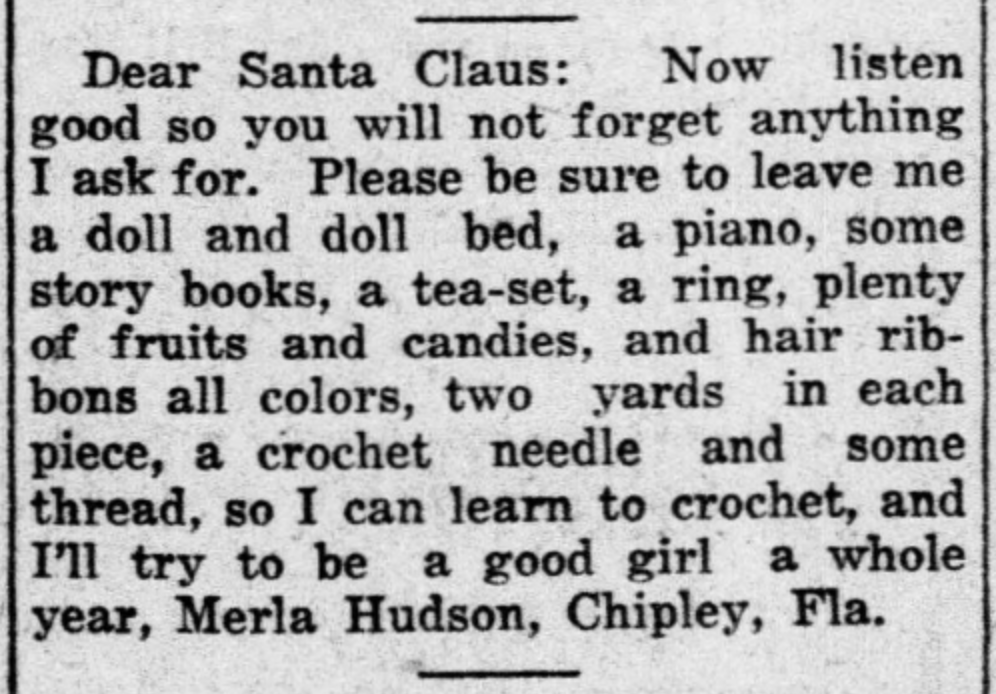 Merla will not be ignored! 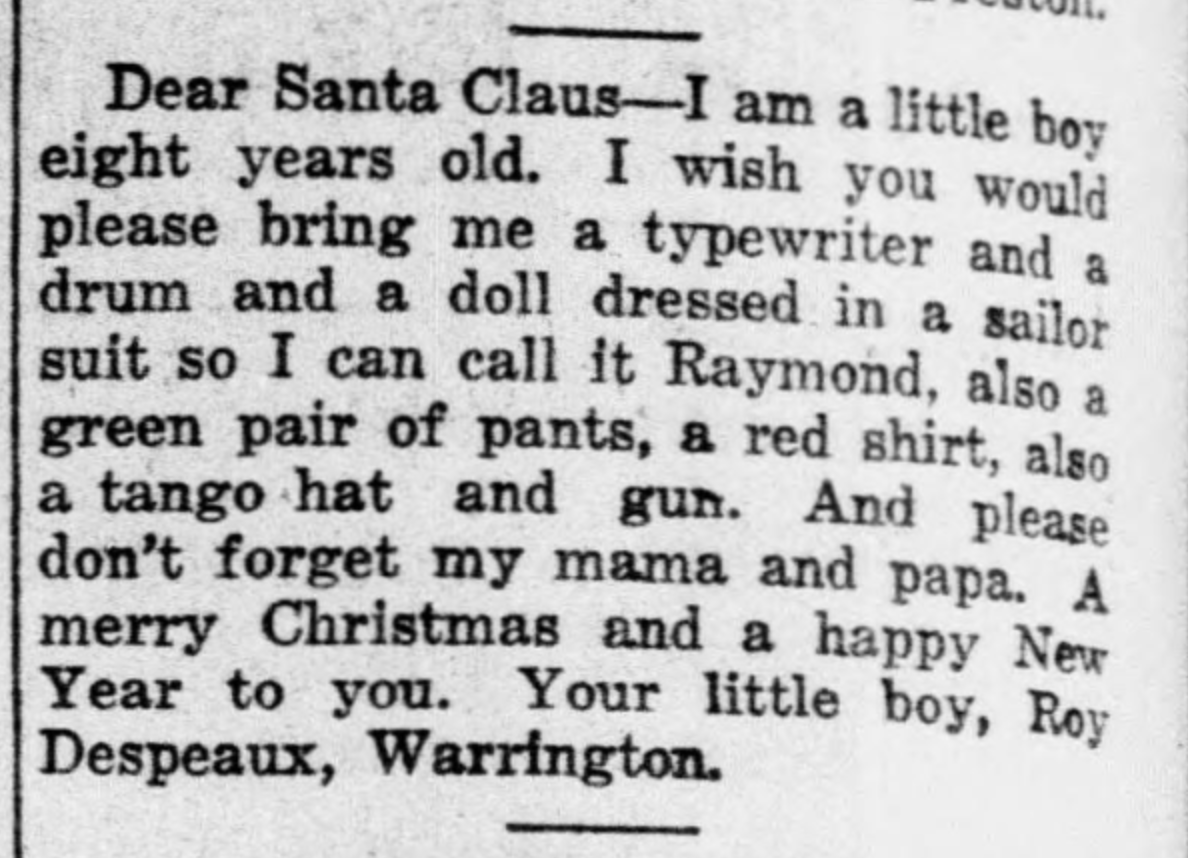 A doll dressed in a cowboy suit could not be called Raymond. A lack of sailor suit is a dealbreaker. 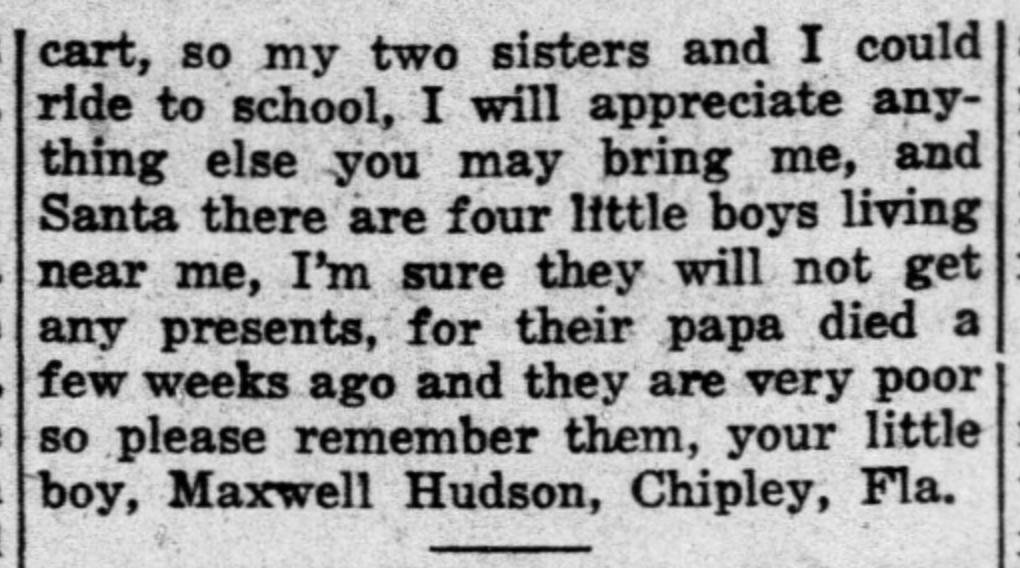 Ways to improve your chances of getting a pony from Santa, according to Maxwell Hudson: 1. Admit right off it’s expensive. 2. Say you will use it to take your sisters to school. 3. Promise to be grateful for anything Santa brings, so as not to seem greedy. 4. Make yourself seem extra kindhearted (and thus deserving of a pony) by showing concern for your fatherless neighbors. Did it work? We will never know. 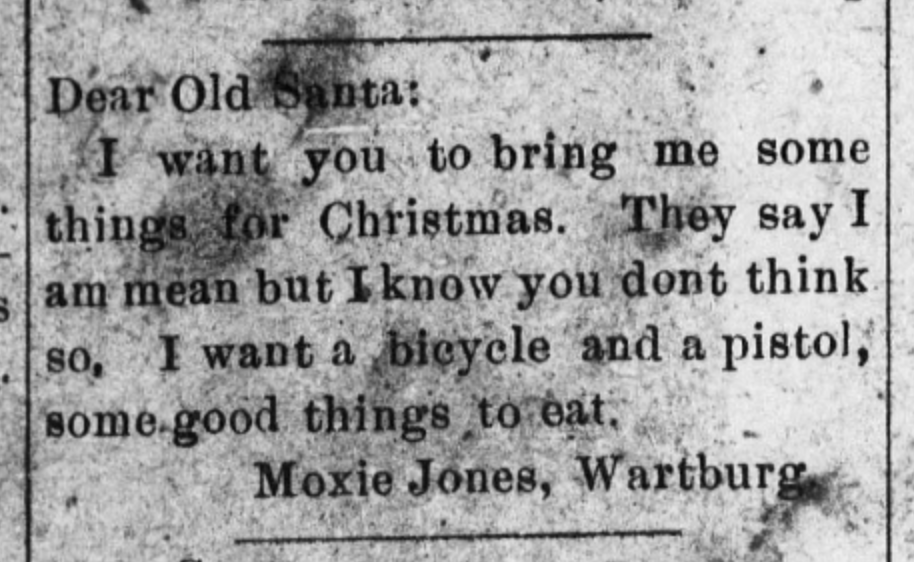 Perhaps a kid known for being mean shouldn’t be given a firearm. 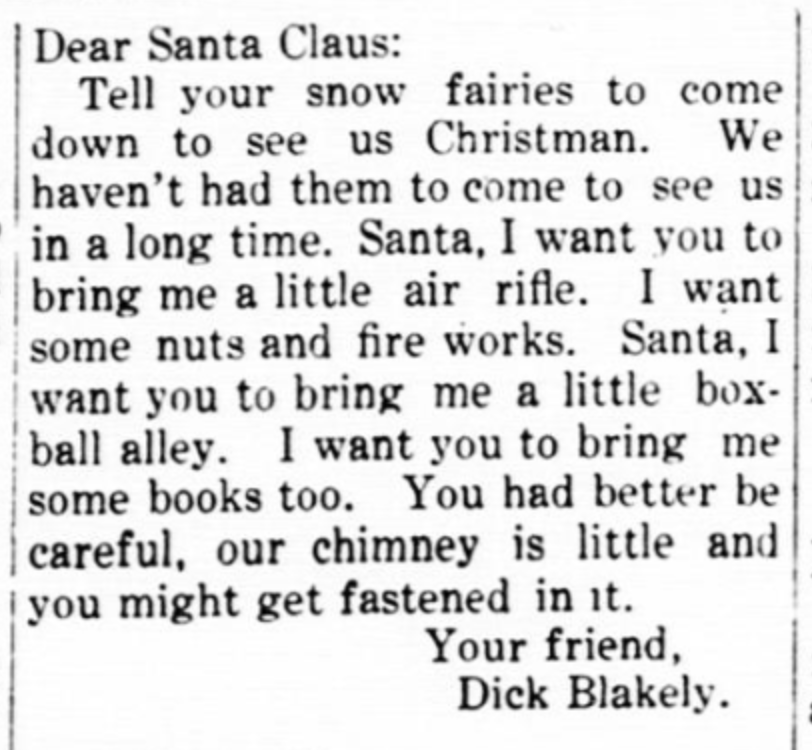 No, Santa certainly wouldn’t want to get “fastened in” the chimney. 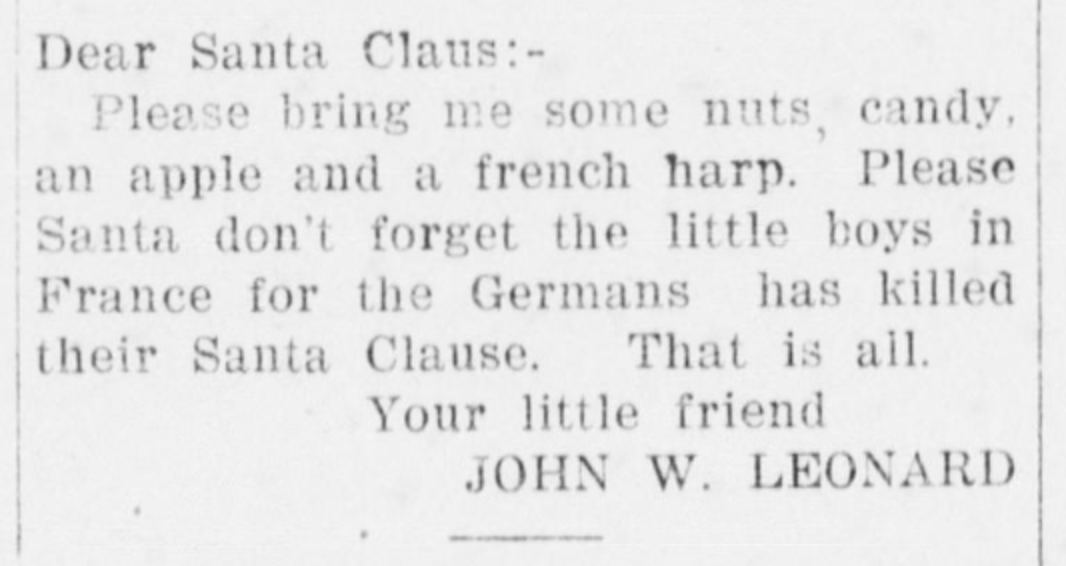 Come on, Mary, Santa’s not a mind reader. 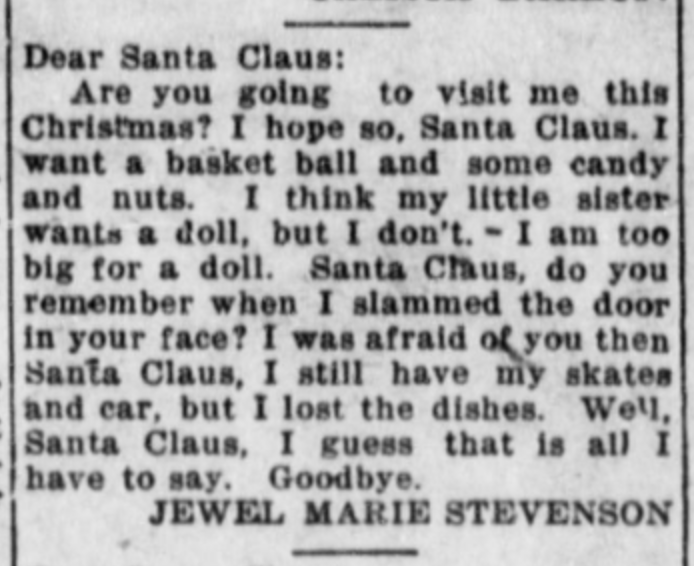 No apology for the door-slamming incident. That might have helped your cause, Jewel. 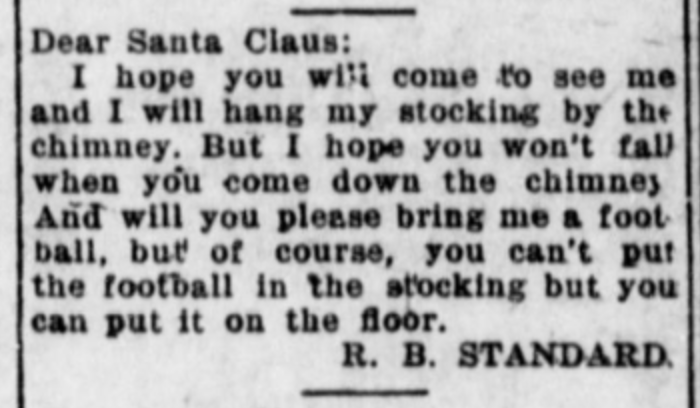 R.B. is very thoughtful to provide such specific instructions; otherwise, Santa might get confused.