9 Things You Might Not Know About Catherine Cortez Masto

When Catherine Cortez Masto was sworn in to Congress on January 3, she became the first Latina senator. A Democrat, the two-term former Nevada Attorney General assumed the seat previously held by outgoing minority leader Harry Reid. Read on for nine facts about this dedicated freshman senator.

1. SHE COMES FROM AN IMMIGRANT FAMILY WHO WORKED THEIR WAY UP.

Cortez Masto’s paternal grandfather, Edward Cortez, was born in Chihuahua, Mexico and immigrated as a young man to the United States, where he met Mary Tapia, of New Mexico. The two got married and started a bakery in Las Cruces, New Mexico. Edward built his own oven from earthen bricks. In 1939, Cortez Masto’s father, Manuel “Manny” Cortez, was born, and in 1940, Edward was naturalized as an American citizen. He served in the army during World War II, and when he returned home, the Cortez family moved to Las Vegas. Edward worked in a bakery and Mary spent her days as a sales clerk, while Manny attended the local public schools.

After graduating from Las Vegas High School in 1956, Manny spent three years in the army before returning to Las Vegas and marrying Joanna Musso in 1960. Cortez Masto’s sister, Cynthia, came along two years later, and Catherine herself was born two years after that. Meanwhile, Manny was attending Nevada Southern University as a pre-law student and working nights parking cars on the Strip. He eventually left college and continued working on the Strip, but in 1969, wanting to move up in the world, he got a job working as an investigator at the District Attorney’s office. In a few years, he moved on to the Public Defender’s office, where he was trained to administer polygraph tests.

A 1972 bid for local assemblyman was unsuccessful, but caught the eye of Nevada Governor Mike O’Callaghan, who appointed Manny administrator of the Nevada Taxicab Authority the next year. Then, in 1976, Manny ran for a seat on the Clark County Commission and won, eventually serving four terms. As part of his duties as commissioner, he served on a number of boards, and became chairman of the board of the Las Vegas Convention and Visitors Authority (LVCVA) [PDF]. In 1991, he became LVCVA president, a role he held for 13 years. Manny had a very successful career in the Vegas tourism industry—in fact, he was responsible for greenlighting the city’s most famous slogan, “What happens here, stays here.” Upon his death in 2006, he was honored in both houses of Congress.

Reflecting on her family’s journey from an immigrant grandfather with a grade-school education to a father who became an important figure in Nevada’s political and business community, Cortez Masto told Mother Jones, “That, to me, is the American Dream.” She and her sister became the first in their family to graduate from college. In an interview with Fusion, Cortez Masto said, “Can you imagine my grandfather if he were alive today and saw his granddaughter who was the attorney general for eight years in the state now running to be the first Latina ever elected to the United States Senate? That’s incredible.”

2. SHE'S HAD MANY ROLE MODELS.

Cortez Masto grew up in Las Vegas, watching her parents and grandparents work hard. “Wow, my grandmother was tough,” she told Latina Magazine of her father’s mother, Mary. “You couldn’t put anything past her. She was a sales clerk and went home to work just as hard. I realized the work ethic, and I knew I had to work hard because of her.” Cortez Masto’s own mother was a bookkeeper, while her father, as previously noted, worked his way up from parking attendant to county commissioner. Cortez Masto told the Reno Gazette-Journal in 2005, “Obviously, he's always been a role model.”

Cortez Masto attended the University of Nevada, Reno, graduating with a bachelor’s in science in 1986, then went on to law school at Gonzaga University in Washington state. She moved back to Nevada, passing the bar exam in 1990 and spending a year clerking for Judge Michael J. Wendell. The judge, who had been on the bench for two decades, also served as a role model for Cortez Masto: “He had great judicial temperament,” she told the Gazette-Journal. “I just learned from him how to be an attorney … how to deal with people.”

She took her first step into politics in 1995, joining the staff of Nevada’s then-governor, Democrat Bob Miller. She was familiar with Democratic politicians: Her father had been a Democrat during his time as county commissioner and he brought prominent Democrats into his family’s life. “Gov. [Mike] O'Callaghan was larger than life and had a big impact on my family,” she told the Gazette-Journal. “My father went to school, and went into the Army with Congressman [Jim] Bilbray. Sen. [Richard] Bryan went to school with my parents.” Cortez Masto found herself thriving in the political environment, and became Miller’s chief of staff in 1998.

3. SHE MARRIED A SECRET SERVICE AGENT.

While serving as chief of staff for Miller in the late 1990s, Cortez Masto was given the assignment of coordinating the logistics of President Bill Clinton’s visit to Las Vegas. The point person on the president’s side was Paul Masto, a Secret Service agent. She later recalled, “He asked me out on a date and he said, ‘Like a good attorney, I asked you out for dinner and you negotiated for lunch.’”

4. SHE RAN FOR ATTORNEY GENERAL BECAUSE “IT WAS TIME TO STEP UP." 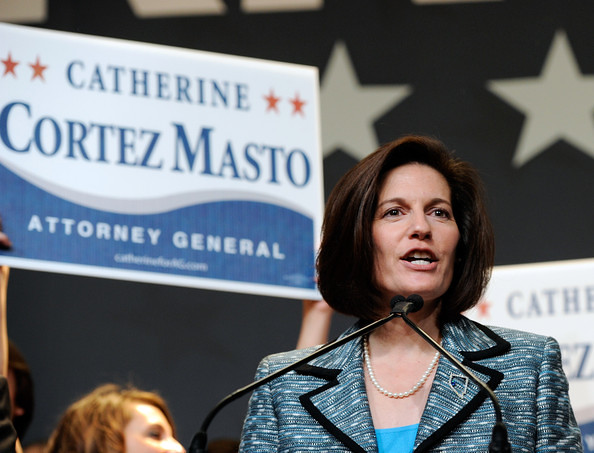 Cortez Masto spent 1999 to 2001 living in Washington, D.C. and working as an assistant U.S. attorney, focusing on drug and victims’ rights cases. In 2002, she moved back to Nevada, becoming assistant county manager of Clark County (where Las Vegas is located), while her husband Paul joined the Secret Service’s Las Vegas office. In 2005 Nevada’s Republican Attorney General Brian Sandoval was nominated for a federal court judgeship, creating a vacancy, and Cortez Masto started to consider her future.

With the support of her parents and Nevada Democratic leaders like Harry Reid, she resigned from her job with the county and began campaigning to become the Silver State’s top prosecutor. “There was never any [political] position I was interested in other than being attorney general,” Cortez Masto told the Gazette-Journal. She had been watching Nevada deal with a methamphetamine crisis, widespread domestic violence, and prevalent elder abuse. She told Remezcla, “For me, those are areas—particularly when it comes to domestic violence prevention and sexual assault—that I had worked in before. I thought it was time to step up and take a leadership role and steer the ship to bring attention to those issues and find solutions to the problems. That’s when I decided to run for Attorney General for the first time in 2006.” She went on to serve two consecutive terms, the limit under Nevada law.

5. PERSONAL EXPERIENCE MADE HER PASSIONATE ABOUT PROTECTING SENIORS.

Cortez Masto had watched her own grandparents “become targets of fraud,” an experience she told Gonzaga University’s law blog was “heartbreaking.” As a result, she said, “Elder protection became my first priority as Attorney General.” Upon taking office in early 2007, she pushed the Nevada legislature to give her office jurisdiction to investigate elder fraud and abuse cases. In May 2007, the governor signed into law Assembly Bill 226 [PDF], creating a special unit within the Nevada Attorney General’s office to prosecute crimes against seniors.

6. SHE CREATED A TASK FORCE TO STUDY DOMESTIC VIOLENCE.

, Nevada was the state with the highest rate of women murdered by men. As attorney general, Cortez Masto created a 15-person team to review the domestic-violence fatality rate and provide recommendations to reduce deaths. On the team, she and members of her office worked alongside police officers, representatives from the Division of Child and Family Services, and a member of the UNLV School of Social Work. In 2013, they released a report recommending specific actions for law enforcement, district attorneys, and local legislators in order to combat intimate partner violence. Since 2013, the domestic homicide rate against women has dropped in Nevada, but it remains nearly double the national average.

7. SHE WORKED TO COMBAT SEX TRAFFICKING.

During her two terms as Attorney General, Cortez Masto introduced over 40 state bills that were voted into law and signed by the Republican governor. She told Elle that her proudest accomplishment came in 2013 with the passage of Assembly Bill 67 [PDF], which defined the specific crime of sex trafficking (replacing previous statues on pandering) and is aimed at punishing pimps. The bill lengthens prison sentences for those convicted, requires that they register as sex offenders, and allows victims of trafficking to bring civil action against the perpetrators. Governor Brian Sandoval signed it into law in June 2013. The same day, he also signed a companion bill setting up a fund for victims of human trafficking. Masto’s office also produced a series of trafficking-awareness PSAs that aired on television in Nevada.

8. SHE’S BEEN ATTACKED FOR NOT SPEAKING SPANISH …

Though Cortez Masto became the first-ever Latina elected to the Senate, during the campaign allies of her Republican opponent, Joe Heck, argued that she wasn’t Latina enough. A former political director for Heck’s campaign quipped on Twitter that Cortez Masto’s ethnicity was only relevant to her when applying for scholarships or running for Senate, and questioned whether she speaks Spanish. Another former Heck aide criticized Cortez Masto’s campaign, calling it “Hispandering at its finest.”

Cortez Masto responded to the attacks, telling Politico: “It's a criticism for me and other Mexican-Americans. It is an attack on all of us who come here and have worked hard in Nevada to make it home.” Cortez Masto does not speak Spanish fluently, though she can often understand it. Her mother’s family is Italian by heritage, while her father was a second-generation Mexican immigrant who only occasionally spoke to her in Spanish. Cortez Masto noted to Latina Magazine that when her father and his parents moved to Las Vegas in the 1940s, there were very few Hispanic families in the area. “[I]t was about being more American for them,” she said, “that is why my generation doesn’t speak as much Spanish. During that time, it was about assimilating.”

9. ….BUT HER MEXICAN HERITAGE IS AN IMPORTANT PART OF HER IDENTITY.

Cortez Masto identifies significantly with her Mexican heritage, and she argues that it makes her better able to represent a state whose population is 28% Hispanic. She told Remezcla, “I’ve always felt, particularly as the Attorney General of the state, that the people that served in my office should be just as diverse as the community we are representing. I think that should be true of Congress.” She also argues that, as someone with a different background than most people in Congress, she brings “a different perspective” and promises to focus, in particular, on passing comprehensive immigration reform and advocating for Dreamers (undocumented immigrants brought to the U.S. as children). “We’re working on a future for everyone,” she told Remezcla, “and we’re bringing families out of the shadows.”