History is all around us, and yet we don’t always notice historical markers in our midst. These markers, whether they’re a bronze plaque or something more inventive, can reveal world firsts, places of birth or death, the locations of momentous discoveries, or other major events that occurred in a particular location. But some are more interesting than others, especially when they're located in a place you might not expect.

In 2006, a marble flagstone was laid in St. Peter’s Square in Vatican City to mark the spot where, on May 13, 1981, Pope John Paul II was shot by a Turkish gunman in a failed assassination attempt. The historical marker, which includes John Paul’s coat of arms and the date of the attack in Roman numerals, replaced some cobblestones and is set into the floor of the famous square.

On the fateful day, Turkish criminal Mehmet Ali Ağca shot the pope four times, causing grievous injuries. Ağca ran off, but was apprehended by a Vatican security guard, some bystanders, and a nun. John Paul survived the attack and attributed his recovery to the prayers he offered to the Madonna of Fatima, whose feast day is celebrated on May 13. John Paul later traveled to the shrine of the Madonna at Fatima in Portugal, and one of the bullets that was recovered from his body was placed inside the crown of the statue of the Virgin at the shrine. Remarkably, John Paul later publicly forgave Ağca and secured a pardon for him.

2. MARTINEZ, CALIFORNIA // BIRTH OF THE MARTINI

As with many great recipes, the precise origins of the martini remain obscure, with a number of people and locations vying for the honor of being home to the cocktail. But that hasn’t prevented the town of Martinez, California from putting up a plaque to proclaim itself the birthplace of the Martini. According to the plaque, situated at 911 Alhambra Avenue, the very first Martini was mixed on that spot. The plaque records the story as follows:

“On this site in 1874, Julio Richelieu, bartender, served up the first Martini when a miner came into his saloon with a fistful of nuggets and asked for something special. He was served a ‘Martinez Special.’ After three or four drinks, however, the ‘Z’ would get very much in the way. The drink consisted of 2/3 gin, 1/3 vermouth, a dash of orange bitters, poured over crushed ice and served with an olive.”

3. THE EAGLE PUB, CAMBRIDGE, UK // THE ANNOUNCEMENT OF THE DISCOVERY OF DNA

The Eagle Pub in Cambridge was established in the 16th century. It was here on February 28, 1953 that Francis Crick and James Watson burst into the pub to announce “We have found the secret of life!” Their discovery of the double-helix shape of DNA has been vital to medicine ever since and has led to numerous scientific advances; in 1962, the pair were awarded the Nobel Prize. The pub has since become associated with this momentous discovery, and so one of English Heritage’s blue plaques was affixed to a wall in 2003 to memorialize this historic moment.

The historical markers inside the pub do not stop there, as in 2013 a second plaque was added to the interior, remembering the role of Rosalind Franklin, who had also been researching the secret of DNA at King’s College, London, and in 1952 had successfully taken the first x-ray photo of DNA, revealing the structure. Unbeknownst to Franklin, her photograph, which became known as “Photograph 51,” was passed on to Crick and Watson’s team, much aiding their research. Sadly, Franklin died of ovarian cancer just five years later, and in her lifetime never gained the recognition she deserved for her part in the discovery. The small plaque in The Eagle reminds drinkers that the discovery of DNA, like many other leaps forwards, was a team effort.

4. PLACE DE LA CONCORDE, PARIS // OFF WITH THEIR HEADS

The Place de la Concorde was called the Place Louis XV until 1792, when amid the fervor of the French Revolution, the statue to Louis was pulled down and the site renamed Place de la Revolution. It was here that the new-fangled beheading contraption, the famous guillotine, was situated. This efficient machine allowed the puppet-masters of the revolution, led by Robespierre, to systematically and quickly dispatch enemies of the state in what became known as the Reign of Terror.

There were three guillotines across Paris, but it was this machine that took the heads of King Louis XVI, his wife Marie-Antoinette, and up to 1200 other individuals. In a twist of fate, Robespierre himself was later beheaded on this guillotine for crimes of tyranny and dictatorship. Since 1830 the site has been renamed Place de la Concorde to move on from its revolutionary past, and a small plaque now lies in the western center of the square, marking the spot where the guillotine once stood. 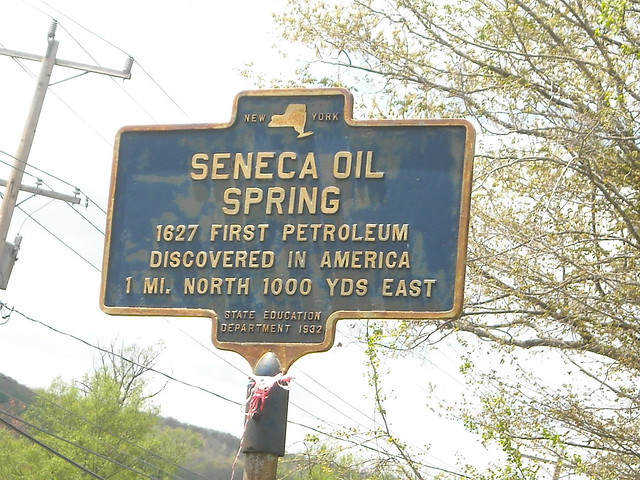 New York is not usually associated with the American oil industry, and yet it was in this Allegany County town that the very first oil was discovered in America by a European. In 1627, a French Catholic missionary named Joseph de La Roche d' Allion was led to a small natural petroleum creek by the Native Americans. The missionary recorded the incident in a letter home to France, providing the first account of oil in North America. Today, a blink-and-you’ll-miss-it sign stands at the edge of the road along State Highway 446 at the intersection with Cuba Lake Road, revealing the significance of this spot.

One of the largest decentralized memorials in the world began in 1992, when the artist Gunter Demnig started laying “Stolperstein,” or stumbling stones, to remember individuals persecuted by the Nazis. Each stone, which is just 3.9 x 3.9 inches and covered with a brass plaque recording the name and dates of the victim, is embedded in the street in front of their last chosen place of residence. Today, there are over 56,000 Stolperstein in 22 European countries, the quiet yet powerful markers reminding us of the scope and horrors of the Nazi era.

The folklore tale of Dick Whittington and his trusty cat has long been tied to the history of London, and is based on the true-life figure of Richard Whittington (c.1354–1423), a wealthy businessman and Lord Mayor of London. The legend tells that Whittington grew up in poor circumstances yet managed to find a home with a wealthy merchant, who took pity on him and gave him a job in his kitchen. Dick’s sleeping quarters were plagued with mice and rats, so he saved his hard-earned money and bought a cat to deal with the pests. But when the merchant went on a long voyage and offered to sell household items for cash, Dick offered up the cat for sale. Unfortunately, without his cat, the mice and rat problems returned, so Dick fled London. But as he reached Highgate Hill, he heard church bells chiming, which seemed to say “Turn again Whittington, thrice mayor of London.” Of course, after hearing this promise of a great future, he returned to the merchant’s house, who by coincidence had just returned from his travels after securing a huge pile of gold for the amazing rat-catching cat. Suddenly Dick was rich, and he went on to use his money so wisely he was named Lord Mayor of London three times.

The Whittington Stone on Highgate Hill in London marks the spot where Dick Whittington supposedly heard the bells calling “turn again,” and was said to have originally been placed there by the man himself. The current stone, carved in 1821, replaced an old stone that historians think was broken in two and used to mend the sidewalk. In 1964 a limestone cat was added to the marker in honor of the little cat who supposedly made Whittington’s fortune.

A small sign attached to a wooden pole at the side of a main street in Ohio City marks the spot of the world’s first car crash. In 1891, inventor James William Lambert had recently built an early single-cylinder gasoline automobile and decided to take it for a spin with his friend James Swoveland. But as the pair motored along the highway—which would have been a far cry from the smooth surface we enjoy today—the automobile hit a tree root and careered off the road and into a hitching post. Fortunately, the two passengers escaped with only minor injuries, and Lambert was not discouraged from his love of motoring. He went on to patent over 600 further inventions, most of which were associated with automobiles.

This marker, commemorating a key moment in French broadcast history, is easily overlooked because it’s on the top balcony of the Eiffel Tower, where tourists tend to be somewhat distracted by the views.

When the Eiffel Tower was first built for the Paris World's Fair in 1889, it was only intended to stand for 20 years, and so its creator, Gustave Eiffel, was constantly trying to find ways to keep the structure from being demolished. As a result, he allowed many scientists to perform experiments from the top of the tower, proving its use as one of the highest points in Paris. On November 5, 1898, Eugène Ducretet successfully carried out the first trials of wireless telegraphy in France when he sent a signal between the Eiffel Tower and the Pantheon more than two miles away. A small plaque now recognizes this feat. Ducretet’s experiments proved the possibilities of telegraphy, and by 1899 he had managed to send waves from the Eiffel Tower all the way across the Channel to England.

In the middle of an unprepossessing traffic island on one of the major roads in London lies a circular marker revealing the gruesome history of this seemingly ordinary location. Back in 1196 at this spot the first execution at Tyburn (which was then just a small village outside London) was carried out, the beginning of a long history as one of the most notorious execution sites in Britain. In 1571 a triangular gallows was erected, which became known as the Tyburn Tree. The “tree” was capable of hanging 24 people simultaneously, although it rarely executed that many at once.

Hangings at that time were a popular spectator sport, and noted diarist Samuel Pepys recorded that at the execution of Colonel James Turner in 1664 at least 12,000 to 14,000 people turned out to watch. The huge, baying crowds soon became unwelcome as Marble Arch became a fashionable address, and so in 1759 the gallows were taken down and state executions moved to Newgate prison.