While most of us think of a coffin as having a pretty singular purpose, there are plenty of inventive people out there who have reimagined what the coffin (or casket) can be. Here are some examples of alternative uses for coffins, both before and after death.


Thinking about building your own coffin but not sure how to store it until your last exit? Just add some slats and set it on end, and you have an instant ominous bookshelf. Woodworker Chuck Lakin makes a more subtle bookcase coffin that is basically two shelves hinged together, ready to transition into a chest for burial. Phoenix Boatworks likewise creates canoe-shaped coffins that function as bookshelves until the "final voyage." Designer William Warren, meanwhile, has envisioned "Shelves for Life" with wooden parts for book storage that can be reconfigured into coffin parts in death.

Back in 2013, a man in Northumberland, England, discovered that the garden trough he'd been using for three decades was in fact a rare Roman sarcophagus. That discovery followed a 2012 auction of a Roman marble coffin that had been found in a Dorset garden. Maybe your resting place will have an unexpected resurrection—it might if you’re buried in stone like a member of the Roman Empire. 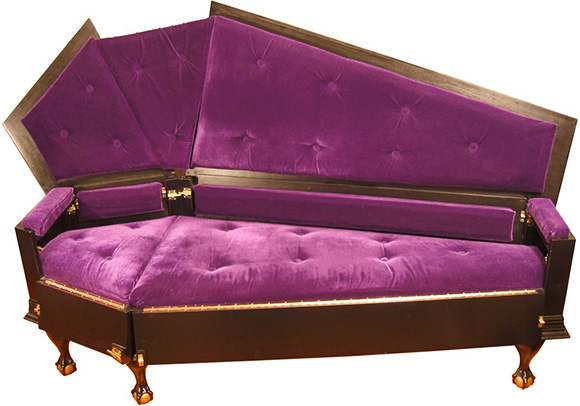 create their plush furniture from 18 gauge steel coffins obtained from California funeral homes. These aren't being recycled out of the cemetery. The coffins are models that have "slight cosmetic inconsistencies," have been scratched during shipment, or were bought by a family and held a body, but not used in cremation or burial.


Designer Charles Constantine's "Coffin Table" might seem like a bold modular choice for the living room with its pine wood angles. Made with open sides for storage, it's also an unusual bent shape. This hints at its future reuse as a coffin, in which the body is arranged in a fetal position facing the eastern sun, a sign of rebirth in some cultures.


Although this isn't exactly up to regulation billiards standards, the coffin pool table from Casket Furniture was envisioned as a source of entertainment in life before its final reuse as a tomb. Considering both a fine pool table and high-end coffin cost thousands of dollars, it makes sense to get some enjoyment from the object in the time you have.

The slyly named "Sundead" was a 2012 conceptual project in which Argentine artist Luciano Podcaminsky built a tanning bed contained in a coffin. The piece contrasted the quest for physical perfection with the inevitability of that body’s decay.

This is best suited for a cookout where your friends are quite chill about their transience, as the roving Open Casket Bar and Grill from the Nightmare Cruisers Hearse Club is a combo hearse and coffin turned into a mobile grilling machine. And if you're in the Detroit area, it's rentable for parties.

Last year, a mysterious "Lost Undertaker" was spotted paddling a coffin in Australia's Lake Burley Griffin. Chilean artist Sebastian Errazuriz was way ahead of him, exhibiting his 2009 "Boat Coffin" in the 2012 London Design Festival. The casket-shaped contraption has a working motor and keel, the idea being that a "sailor" could stage his or her own funeral, navigating the casket from shore, then pulling its plug when they're ready for the end.

You'd think the data on traffic fatalities would make drivers superstitious, but hot rods made from coffins aren’t that uncommon. The most famous is likely the puntastic DRAG-U-LA from The Munsters, especially the 1965 episode “Hot Rod Herman,” in which Grandpa Munster competes in a drag race. That car was made from an actual fiberglass coffin. Classic and custom car fans, perhaps inspired by the eerie auto, are still building their own DIY vehicles—maybe for some grand theft grave digging.