Legendary monsters "exist," if only in legend, all over the world. The series of monsters continues with a look at a few strange stories from North America.

Chupacabra means goat sucker. The legendary animal is said to roam through Mexico, southwest USA, and Puerto Rico as well as other areas. The Chupacabra is blamed for mysterious livestock deaths, and examples of Chupacabras have been found and photographed, usually dead. The creature is described variously as resembling a hairless bear, sometimes with spikes on its back, or a hairless dog-like animal. Some of the carcasses and photographs have been studied and turned out to be coyotes with a severe case of mange. Image by DeviantART member Raenyras. 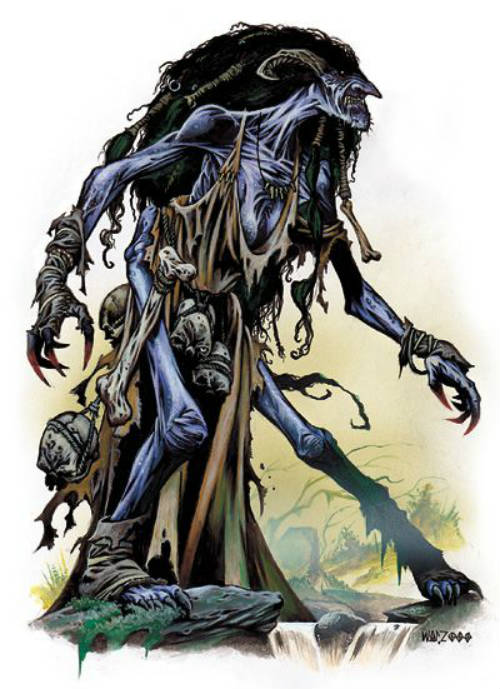 Loogaroo are demons that haunt the West Indies, particularly Haiti, Grenada, and the Dominican Republic. The name is a corruption of loup garou, the French werewolf. The Loogaroo is sometimes described as a witch or a vampire, but often is a shapeshifter that holds all the attributes of other monsters. This monster sucks blood from innocent victims, which is given to the devil in exchange for magical powers. The Loogaroo is closely related to the Soucouyant of Trinidad and Guadeloupe. If the Loogaroo sucks out too much blood, the victim will die and become a Loogaroo himself.

La Llorona means "the weeping woman." This legendary ghost of New Mexico was once a beautiful woman named Maria. She rejected most of her suitors, and married the most handsome young ranchero around. They were happy together for a time, and she bore two sons. But the handsome husband grew bored and turned to other women and ignored Maria. He even preferred the company of his sons over her, which drove her to a jealous rage one night and she threw the two boys in the Santa Fe River and they drowned. In another version of the story, the children died while Maria was away cavorting with other men. Either way, she was responsible for their deaths, and could not bear the guilt. Maria walked the riverside in her white gown, crying for her sons, until she died of starvation on the river bank. Her ghost came back and continued the vigil, wailing and screaming in the night. Now called La Llorana, she attacks those who venture to the river at night, looking to kill people in her grief. The tale is also told along other rivers of the Southwest, and is used to scare children away from the dark, dangerous waters. Photograph by Flickr user Mikamatto. 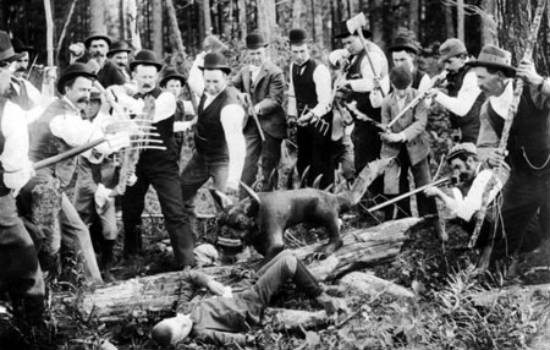 The Hodag (Bovinus spiritualis) is a ferocious animal native to Wisconsin. The black Hodag was first discovered in 1893 and is the largest of the several Hodag species. It has two horns and a series of spikes along its spine. There are also the Sidehill Dodge Hodag, the Cave Hodag, and the Shovel-nose Hodag. See more pictures of the Hodag. 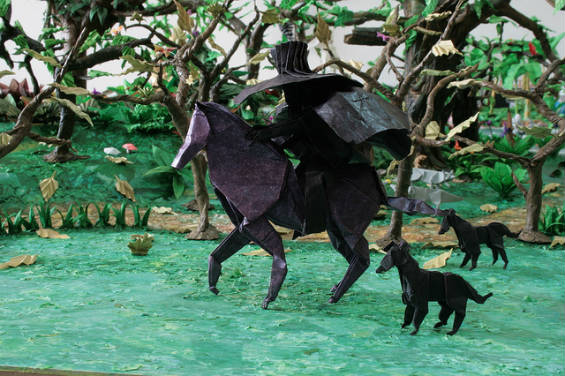 El Sombrerón is the man with the big hat. He is short and wears a thick belt and heavy boots. The legend in Guatemala tells of him always wearing a black hat, while he victimizes young women.

The legend goes that a young girl named Susana in La Recolección – yeah, she had pretty hair and big ol’ peepers (that means eyes) – was admiring the moon and stars from her balcony one night when she was approached and serenaded by a man in a big hat. Worried and upset that their daughter was outside so late, Susana’s parents forced her to come inside. The man in the hat returned and serenaded her each night, making it impossible for her to sleep, and whenever her parents would try to feed her, she’d find the food contaminated with dirt. Fed up, the parents cut the girl’s hair and had it blessed by a priest – naturally, this caused the goblin to stop bothering her, either because of the holy water or because he didn’t like chicks with pixie cuts.

El Sombrerón has a habit of braiding the hair on horses and dogs when no one is around. A similar goblin is also called Tzizimite, and other names depending on the local language. The legend casts him as a general bogeyman of Mexico. A similar legend in El Salvador is called Cipitio, who is a short boy with backward feet, and, of course, a big hat. El Cipito pursues pretty girls and torments them if they reject his advances. Altogether, this useful tale is told to keep young girls from flirting with strange men. 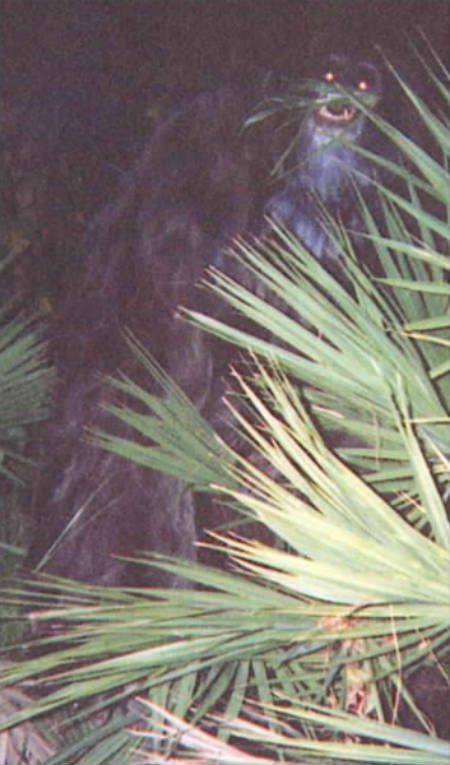 The Skunk Ape appears now and again throughout the American Deep South, from Oklahoma to North Carolina, but most sightings have been reported in Florida. The creature gets its name from its awful odor. In 2000, an anonymous letter accompanied several photographs purporting to show an ape in Myakka City, Florida. The writer of the letter seemed to think this was an escaped orangutan, but no missing ape was reported. Later, an investigation was launched over a horse that was injured by an unknown animal in the same area. Photograph by David Barkasy and Loren Coleman. 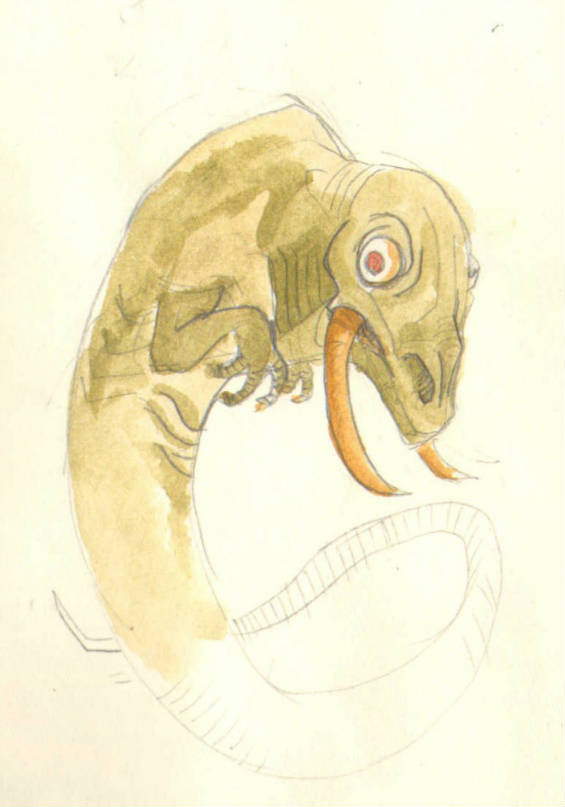 The Gowrow was first reported in Arkansas in 1897. It lives in the lakes and caves of Arkansas and got its name from the horrible sounds it makes. The Gowrow was described as a twenty-foot-long reptile with enormous tusks that ate livestock. One enterprising Arkansan claimed to have captured a Gowrow, and would let the public see it for a small price of admittance. But just before the reveal, he announced the Gowrow had escaped. The audience was so busy running in terror that no one asked for their money back! Image by Gustav. The Jackalope (Lepus temperamentalus) is a cross between a rabbit and an antelope (or sometimes a goat or deer) seen over most parts of the United States. Jackalopes only mate during electrical storms. They can be caught by using whiskey as bait, which will render them easier to sneak up on. Jackalope milk is supposed to have medicinal qualities. The legend of the Jackalope may have come from sightings of rabbits infected with the Shope papillomavirus, which causes hornlike growths. The Jackalope is rumored to be extinct, but can be seen in taxidermy shops everywhere. Photograph by Flickr user Paul-W. 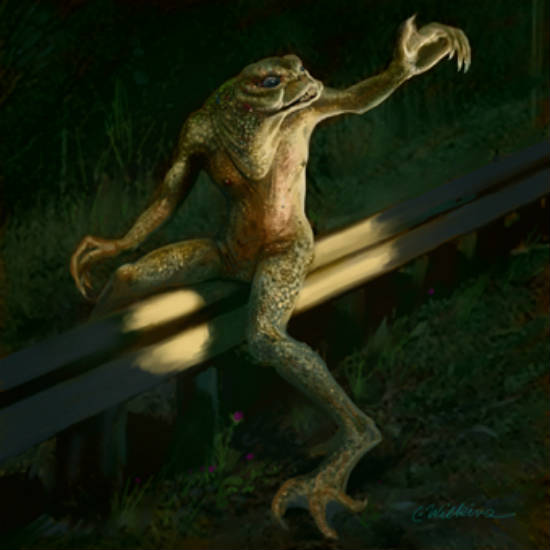 Loveland, Ohio, has multiple sightings recorded of an unusual reptile, which has become known as the Loveland Frog. The most famous sighting was by police officer Ray Shockey in 1972. He saw an animal lying beside the road, and when he approached, it got up on two legs and ran away! He described it as three to four feet tall, about 60 pounds, with a face like a frog or lizard. Officer Mark Matthews had a similar encounter a couple of weeks later. The story grew as it was retold, and the original officers say they never thought the creature was a monster, but possibly an escaped pet. However, there have been other sightings, particularly one from 1955. A businessman reported that he saw three creatures beside the road that were three to four feet tall and had wrinkles on their heads instead of hair, and webbed hands and feet. The most bizarre thing about the earlier sighting is that one of the creatures waved a wand that emitted sparks! Image by Cathy Wilkins.

10. The Beast of Bladenboro 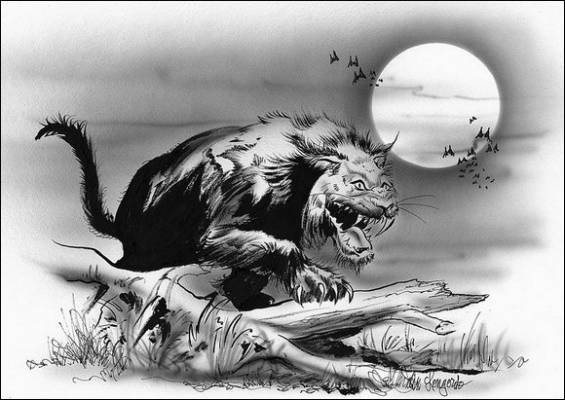 The Beast of Bladenboro is a huge catlike monster. Beginning in late 1953, Bladenboro, North Carolina was the scene of unexplained attacks. A farmer saw a beast resembling a cat carry his dog off. Several dog carcasses were later found drained of blood. Hunters came from all over the country to hunt the “vampire beast” until the small town got sick of the hoopla. A bobcat was then shot and displayed, and the world was assured that the beast had been found. Although some reports have surfaced that the beast remains active, it hasn’t stopped Bladenboro from hosting an annual festival centered around the legend -- which is this weekend.

A list of ten monsters of North America leaves a lot of favorite monsters out, so expect part two of this post next week!