If you, like me, have been accused of suffering from witzelsucht, or any other such judgment leveled against your innocent penchant for puns, then let it be known: Halloween is the costumed arena where we shall have our revenge. What follows below is a list of pun-based costumes for Halloween, each of which assuredly consists of a very long walk to a very short punchline. Let the groans begin.

1. Dress as a Jungle goddess and cover yourself in numbers that can’t be divided. You’re Amazon Prime.

2. Dress as a many-pronged garden tool and rap all night. You’re d’rake.

3. Dress as a zombie boxer and say you’re there to kill a doppelganger. You’re a dead ringer.

4. If you’re just single and looking for love, put on a coal worker’s hat and a headlight. You can flirt by saying you’re an unaccompanied miner.

5. Dress as a bloodsucking bug and act jittery all night. You’re just a nervous tick.

6. Create an electrical socket out of cardboard and then doodle, collage and scrapbook all over it. You’re a creative outlet.

7. Dress as a jar of Jif peanut butter and cover yourself in gold flowers. When people ask, say you’re Jif Gold-bloom.

8. Attach half of a window to your butt. Say you’re a pane in the ass.

9. Dress as a sea cow in every color of the rainbow. Introduce yourself as all of hue-manatee.

10. Put a muzzle on your face and create a podium out of cardboard. You’re a Hannibal lectern.

11. Cover yourself in parchment or wrapping paper and draw dice and question marks all over it. Voilà! Chance the Wrapper.

12. Cover yourself in gold body paint and carry around a saxophone. You’re Goldman Sax. (Bonus points if you can actually play "Careless Whisper.")

13. Wear a sign that says Route 666. When people point out the extra 6 as a mistake, correct them by saying “No, I’m the Route of All Evil.”

14. Get together a group of 12 of your single friends and just say you’re the “bae-cursed dozen.”

15. Get a bunch of girlfriends together to dress in formalwear and fine jewelry, then add bucket hats and fishing poles. Fight all night. When people ask, say you’re the Reel Housewives (of whatever city).

16. Dress like a hipster, introduce yourself as Anna Jones and carry a whip. You’re Indie Anna Jones.

17. Don a nun costume and a silver medal. You’re Second to Nun.

18. Wear all orange, get a spray-tan, and put on a sailor’s hat. You’re a sun-kissed naval orange.

19. Dress as Elmer Fudd and get very very slightly angry at everything. You’re minimum wage.

20. Cover yourself with legal jargon and speak Italian. Tell people you’ve got laws-on-ya.

21. Wear a business suit and carry around a hunk of meat. You’re an important steak-holder.

22. For a group of tech junkies: Dress as wild cats and act crazy all night. You can’t help it; you’re just hyper-lynx.

23. Dress as a tube of Colgate Total and photo-bomb people’s pictures all night by standing directly in front of them. You’re the Total Eclipse.

24. Wear a Red Cross on your chest, a leather jacket and sunglasses. You’re the cool aid man.

25. Dress as a kid and cover yourself in flour. Sing peace songs all night—you’re a flour child.

Sam Corbin is a writer and performer based in Brooklyn. Her puns have been featured in The New Yorker, InStyle Magazine, Bust Magazine, Gothamist, and Huffington Post. Sam is also a multi-time champion of the Punderdome, a monthly pun tournament in Brooklyn, New York. She currently works at BuzzFeed. Twitter: @ahoysamantha.

This piece originally ran in 2017.

During this weekend's three-day sale on the Mental Floss Shop, you'll find deep discounts on products like AirPods, Martha Stewart’s bestselling pressure cooker, and more. Check out the best deals below.

You may not know it by looking at them, but these tiny earbuds by Apple offer HDR sound, 30 hours of noise cancellation, and powerful bass, all through Bluetooth connectivity. These trendy, sleek AirPods will even read your messages and allow you to share your audio with another set of AirPods nearby.

For the listener who likes a traditional over-the-ear headphone, this set by Sony will give you all the same hands-free calling, extended battery power, and Bluetooth connectivity as their tiny earbud counterparts. They have a swivel folding design to make stashing them easy, a built-in microphone for voice commands and calls, and quality 1.18-inch dome drivers for dynamic sound quality.

This Sony headphone model stands out for its extra bass and the 30 hours of battery life you get with each charge. And in between your favorite tracks, you can take hands-free calls and go seamlessly back into the music.

If you’re thinking of taking the plunge and buying a new pressure cooker, this 8-quart model from Martha Stewart comes with 14 presets, a wire rack, a spoon, and a rice measuring cup to make delicious dinners using just one appliance.

If you're obsessive about cleanliness, it's time to lose the vacuum cord and opt for this untethered model from JASHEN. Touting a 4.3-star rating from Amazon, the JASHEN cordless vacuum features a brushless motor with strong suction, noise optimization, and a convenient wall mount for charging and storage.

This EvaChill personal air conditioner is an eco-friendly way to cool yourself down in any room of the house. You can set it up at your work desk at home, and in just a few minutes, this portable cooling unit can drop the temperature by 59º. All you need to do is fill the water tank and plug in the USB cord.

The perfect cup of cold brew can take up to 12 hours to prepare, but this Gourmia Cold Brew Coffee Maker can do the job in just a couple of minutes. It has a strong suction that speeds up brew time while preserving flavor in up to five cups of delicious cold brew at a time.

Never deal with handling gross garbage again when you have this smart bin helping you in the kitchen. With one touch, the Townew will seal the full bag for easy removal. Once you grab the neatly sealed bag, the Townew will load in a new clean one on its own.

Parking sensors are amazing, but a lot of cars require a high trim to access them. You can easily upgrade your car—and parking skills—with this solar-powered parking sensor. It will give you audio and visual alerts through your phone for the perfect parking job every time.

Reusable water bottles are convenient and eco-friendly, but they’re super inconvenient to get inside to clean. This smart water bottle will clean itself with UV sterilization to eliminate 99.9 percent of viruses and bacteria. That’s what makes it clean, but the single-tap lid for temperature, hydration reminders, and an anti-leak functionality are what make it smart.

Grab a One-Year Subscription to PlayStation Plus for Just $32

If you have a PlayStation 4—or soon, a PlayStation 5—you need a subscription to the PlayStation Plus service, which offers unlimited access to online multiplayer, free games every month, exclusive sales, and robust cloud storage. And through the weekend, you can get a year subscription for only $31.59, a savings of over 28 percent.

This service is aimed at anyone who isn't looking to invest money in new games too often. In addition to being able to play Star Wars: Battlefront and the Call of Duty series against other players online, PlayStation Plus also allows users to download select titles for free every month. Recent entries have included installments in the Tomb Raider and Street Fighter series, along with the latest versions of NBA 2K and MLB The Show. Perhaps most importantly is the aforementioned cloud storage, where you can save your game data outside of the system so you'll never lose it or run out of space.

Start your PlayStation Plus subscription today and enjoy 365 days of benefits while it's on sale for just $31.59 through the weekend. 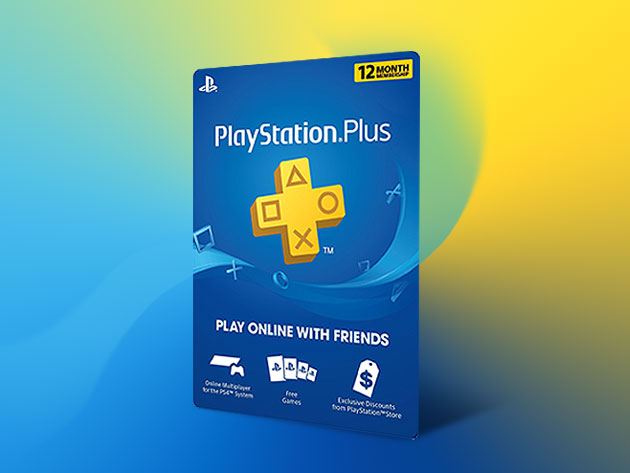