15 Monumental Facts About the Lincoln Memorial

Seated proudly at the west end of Washington, D.C.’s National Mall, the Lincoln Memorial is one of the most beloved American monuments: It attracts millions of visitors each year. Here are a few things you might not know about its construction and legacy.

1. IT TOOK MORE THAN 50 YEARS TO GET A MEMORIAL FOR LINCOLN BUILT AND OPENED TO THE PUBLIC.

Efforts to create a fitting tribute to Abraham Lincoln began immediately after the leader’s assassination in 1865. Within two years, Congress had officially formed the Lincoln Monument Association and began seeking out craftsmen to bring the project to life. However, squabbling about the details of the project delayed construction until 1914. According to the National Parks Service, most of the memorial’s “architectural elements” were completed in April 1917; construction was slowed by World War I, and the memorial wouldn't open until 1922.

2. THE 19TH CENTURY DESIGN WAS MUCH MORE ELABORATE THAN THE FINISHED PRODUCT.

In the early legs of Congress’s plan to honor Lincoln, sculptor Clark Mills was enlisted to dream up the design. (Mills won the gig after creating a cast of Lincoln’s face and head in 1865 and a famous statue of Andrew Jackson on horseback in 1853.) Congress was not prepared, however, for Mills’s vision for the tribute, which involved a 12-foot likeness of Lincoln signing the Emancipation Proclamation and a collection of 36 bronze figures (six on horseback) all housed within a 70-foot structure.

3. ONE HIGHER-UP DISAPPROVED OF WEST POTOMAC PARK AS A MEMORIAL SITE DUE TO ITS SWAMPY AND CRIMINAL REPUTATION.

When the Lincoln Memorial project was revived in the early 20th century, there were still opponents of its construction—mainly, Speaker of the House Joe Cannon. Staunch conservative “Uncle Joe” had a number of problems with the project (including his aversion to big government spending), but Cannon’s main complaint involved the proposed design and location for the monument, which he felt were unworthy of his hero Lincoln. “So long as I live,” he once told Secretary of War Elihu Root, “I'll never let a memorial to Abraham Lincoln be erected in that g-------d swamp,” referring to the marshy terrain and proclivity for producing discarded dead bodies.

4. THE TRAIN STATION WAS A PROPOSED ALTERNATE LOCATION FOR THE MEMORIAL.

Washington, D.C.’s Union Station, a major American transportation hub since its opening in 1907, was suggested by Cannon’s allies as a superior venue for a tribute to Abraham Lincoln than the Potomac River could ever be. President Theodore Roosevelt originally approved the relocation of the project to the railway stop, but took heat from the American Institute of Architects, which wanted to maintain plans for developing the Potomac site.

The Lincoln Memorial was brought to life through the collaboration of many designers and artisans. Daniel Chester French designed the statue of America’s 16th President—which was produced by a family of Tuscan marble carvers known as the Piccirilli Brothers—and architect Henry Bacon created the monument building. The Italian Piccirillis injected Roman influence into the project, modeling the pillars upon which Lincoln rests his arms on fasces, the bundles of wood that have represented power for centuries.

6. THERE ARE ALSO GREEK INFLUENCES IN THE MEMORIAL.

Meanwhile, Bacon approached the construction of the exterior building using design cues from the classic Greek Doric temple.  According to the National Park Service, it was based specifically on the Parthenon. Bacon reportedly felt that “a memorial to the man who defended democracy should be modeled after a structure from the birthplace of democracy.”

7. BACON’S CHIEF COMPETITOR HAD A FEW OUTRAGEOUS IDEAS FOR THE MONUMENT.

When some elected officials took exception to Bacon’s ideas for the structure, architect John Russell Pope presented alternative designs for a tribute to Lincoln: Among his proposals were a traditional Mayan temple, a Mesopotamian ziggurat, and an Egyptian pyramid.

8. THE MEMORIAL WAS ACTUALLY THE SECOND LINCOLN SCULPTURE DESIGNED BY FRENCH.

Just two years before beginning on the Washington project, French presented a bronze statue of Lincoln to the Abraham Lincoln Memorial Association of Lincoln, Neb. The piece depicts the President upright with his hands joined at the waist and head tilted downward. As would be the case with the later memorial, the base on which the sculpture sits was designed by Bacon. The statue still sits on the grounds of the Nebraska State Capitol.

9. LINCOLN NEARLY DOUBLED IN SIZE AS THE PLAN PROGRESSED.

French’s initial blueprints included a 10-foot Lincoln. As not to see the President outdone by the grandeur of Bacon’s surrounding hall, French bulked Honest Abe up to a more majestic height of 19 feet.

10. ABOUT 40 PERCENT OF THE MONUMENT IS UNDERGROUND.

When viewers bask in the 99-foot-tall, 202-foot-wide Lincoln Memorial, they’re really only seeing a little more than half of the construction. Rooted beneath the ground is the piece’s foundation, which extends 66 feet into the earth at its deepest point to support the weight of the marble structure.

11. LINCOLN’S SON LIVED TO SEE THE UNVEILING OF THE MONUMENT.

In the end, the memorial took eight years to build. Among those present to observe the Lincoln Memorial’s official dedication in May 1922 was a 78-year-old Robert Todd Lincoln, the only surviving son of the former president, who had visited the site during construction.

12. FRENCH MAY HAVE DESIGNED THE STATUE WITH A NOD TO AMERICAN SIGN LANGUAGE.

Observers who are literate in American Sign Language have taken note of the positioning of the sculpted Lincoln’s fingers, recognizing in their arrangement the signification of the letters A and L. Although there is no record to indicated that French intended to have the statue engaged in the act of signing, historian Gerald J. Prokopowicz finds reason to believe that the design was deliberate. Among the facts supporting Prokopowicz’s claim include a sculpture French had made of education of the deaf pioneer Gallaudet where he was teaching a student the letter A, and the fact that French is known to have tweaked his original models of Lincoln’s right hand from a clenched hand to an open one.

Furthermore, Lincoln himself was particularly invested in the cause of furthering the study of sign language: He authorized the creation and signed the charter of Gallaudet University, the school for the deaf whose founder French had also sculpted.

13. AN AD HOC CONCERT WAS HELD ON THE MEMORIAL STEPS IN RESPONSE TO RACIAL PREJUDICE.

In 1939, African American singer Marian Anderson was prohibited from performing at the Daughters of the American Revolution’s Washington, D.C. Constitution Hall. After catching wind of this discrimination, First Lady Eleanor Roosevelt and Secretary of the Interior Harold LeClair Ickes offered up the Lincoln Memorial as the venue for a massive concert to feature Anderson on the forthcoming Easter Sunday. Anderson performed at the historic site before a crowd of 70,000.

14. RICHARD NIXON VISITED THE MONUMENT AT 4 A.M. ONE NIGHT TO DEBATE THE MERITS OF THE VIETNAM WAR.

As opposition to the Vietnam War found traction among American youth, sites like the Lincoln Memorial became venues for pacifist protests. In May 1970, just days after the Kent State shootings, the monument hosted a candlelight vigil that lasted into the night. The demonstration attracted an unlikely visitor: President Richard Nixon, who visited the Memorial just after 4 a.m. to “talk some sense” into the protesting crowd of around 30 students. Nixon later recounted, “"I walked over to a group of them and shook hands. They were not unfriendly. As a matter of fact they seemed somewhat over-awed and of course quite surprised."

15. THE MEMORIAL WALLS FEATURE A TYPO. 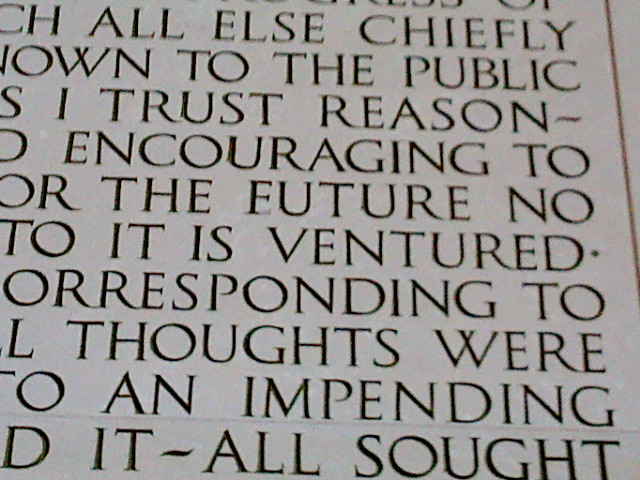 The north wall of the monument building features an inscription of Abraham Lincoln’s second inaugural address, a speech originally delivered in March 1865 at the tail end of the Civil War. Lincoln’s memorable incantation, “With high hope for the future, no prediction in regard to it is ventured,” concludes the first paragraph of the inscription, though with a minor error: The word “FUTURE” is misspelled as “EUTURE,” a blunder that remains visible despite attempts to correct it.