In March 2011, an earthquake and subsequent tsunami led to the meltdown of a nuclear power plant near the Japanese city of Fukushima. The devastating incident received a level 7 on the International Nuclear and Radiological Event Scale (a score so high that it had only previously been given to one other event: The Chernobyl incident in 1986). An exclusion zone was drawn, forcing roughly 170,000 citizens to leave their homes and possessions behind. For years, the area sat trapped in time, with rotting food still sitting on restaurant tables.

Finally, in 2016 some select visitors were granted permits to visit restricted zones. One of those people was the dark tourism photographer Rebecca Bathory. Known for her book Soviet Ghosts, Bathory is again documenting uninhabited spaces that have fallen into decay. "The experience here was so much more emotional [than Soviet Ghosts]," she told Mental Floss in an email.

Coinciding with the cherry blossom season, Bathory attempted to capture the site of the horrible tragedy with a touch of optimism. "I wanted to capture how a moment of time, a moment from which hopefully these towns will continue to be cleaned up and rebuilt and one day residents will return to their homes and rebuild their towns, very much in the same way Hiroshima has become a thriving city again," she explains in her book.

Bathory spent five days exploring the area and capturing the unsettling landscape. Strangely, amongst all the decay, some buildings still had electricity; one bookstore even has a running computer.

"Even through disaster nature will replenish the land and those that died will be remembered and honoured," she writes. "It is particularly important for me to capture in photographs Fukushima as it currently exists, not only for historical records, but to inform people about this tragedy so it is remembered. As the memory fades and those terrible images of that day no longer flood the media, it can be so easy for us to forget."

You can check out all the pictures in Bathory's new book Fukushima: Return To, which comes out May 20.

Whiten Your Teeth From Home for $40 With This Motorized Toothbrush

Since many people aren't exactly rushing to see their dentist during the COVID-19 pandemic, it's become more important than ever to find the best at-home products to maintain your oral hygiene. And if you're looking for a high-quality motorized toothbrush, you can take advantage of this deal on the AquaSonic Black Series model, which is currently on sale for 71 percent off.

This smart toothbrush can actually tell you how long to keep the brush in one place to get the most thorough cleaning—and that’s just one of the ways it can remove more plaque than an average toothbrush. The brush also features multiple modes that can whiten teeth, adjust for sensitive teeth, and massage your gums for better blood flow.

As you’d expect from any smart device, modern technology doesn’t stop at functionality. The design of the AquaSonic Black Series is sleek enough to seamlessly fit in with a modern aesthetic, and the charging base is cordless so it’s easy to bring on the go. The current deal even includes a travel case and eight Dupont replacement heads.

Right now, you can find the AquaSonic Black Series toothbrush on sale for just $40.

Get More Likes With This Award-Winning Photo Editing Bundle

Whether you're looking to edit the perfect headshot for LinkedIn, snap the best photo of your $30 bowl of ramen for Instagram, or post the ideal (and cat-less) dating profile pic, you'll need the right tools to get your photography noticed. You can learn to be a master photo editor with this six-course bundle in the award-winning software Luminar.

This Luminar bundle uses artificial intelligence for augmented presets, along with tutorials and a thorough eBook guide that will teach you how to get the most out of your photos. Additionally, you’ll get six separate courses in this bundle that will dive deep into editing the specific photography subject your heart desires.

Your education will kick off with a review of over 60 one-click Luminar looks that will quickly enhance images for speedy improvement. You can do this in batches across a range of photos or get even more granular on a single one, with customizable brushes, masking control, and lookup tables for color grading.

Color grading can be especially important when editing images from nature. You can learn to make the most of the program and your photos with the Amazing Planets lesson, where you’ll learn to make images truly out of this world. Learn to add a foreign planet over a skyline, or even a more natural moon for drama.

Nature scenes are a stark contrast from busy city streets, but you’ll learn to master both in this bundle of lessons. Tackle these scenes with the Cinematic Bespoke course that will train you to perfect portraits in city settings with contrast and depth.

This six-course bundle of Luminar photo editing lessons is available today for just $59, which is 75 percent off its usual price. 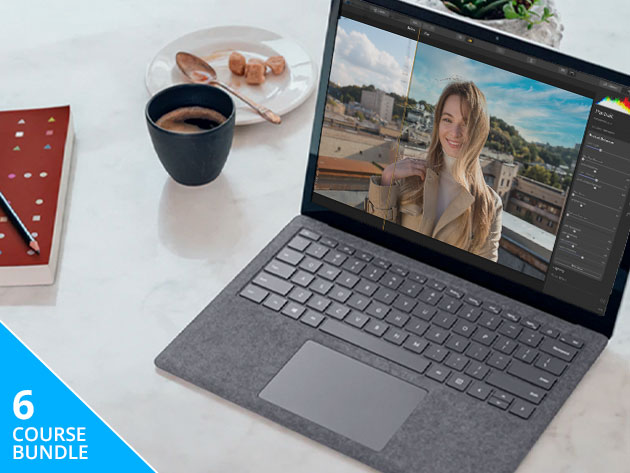