8 Facts About Once Bitten For Its 35th Anniversary

The horror comedy Once Bitten (1985), starring Jim Carrey and Lauren Hutton, tells the story of a 400-year old vampire who feeds on virgins to keep her youthful appearance. The film, which is still regularly revisited, had a decent showing at the box office, but was not a hit with most critics. With Halloween and the film's 35th anniversary fast approaching, we decided to take a look back at the cult classic with a little help from one of the original screenwriters, Jeffrey Hause.

Jim Carrey appeared in a couple movies as a young comedian, but nothing that would have made him a famous actor. In 1984, he landed a job on a sitcom about a cartoonist at an animation company called The Duck Factory, but the series was canceled after one season. That bit of bad news turned out to be a good thing for Carrey, as it freed him up to audition for the lead role of Mark Kendall in Once Bitten.

Writer Jeffrey Hause campaigned for the Family Ties star to be the lead in the film. Sam Goldwyn Jr. of The Samuel Goldwyn Company was not convinced that Fox could carry the movie. Carrey was cast, and Hause said that it only took one scene to convince him that the young comedian was right for the part. “We had written a dozen sleazy L.A. bar sight gags into this scene—all cut—but Carrey just had to walk across the bar and look scared: Somehow he made that funny! Every line delivery was fresh and original, and he knew how things looked on camera without having to look through a lens.” For his part, Michael J. Fox didn't make out so badly; a few months before Once Bitten was released, Fox became a major box office force with both Back to the Future and Teen Wolf.

3. LAUREN HUTTON WAS NOT A FIRST ROUND PICK EITHER. 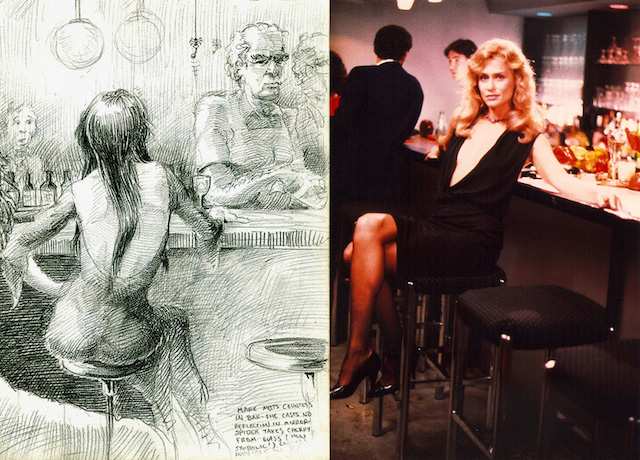 Before the rewrites and The Samuel Goldwyn Company’s involvement, Hause and his writing partner David Hines wanted actress Elvira to play the Countess. Director Howard Storm wanted actress Morgan Fairchild for the part. The sketch above shows Hause’s vision for the bar scene in which the vampiress is introduced. “It's dark, she casts no reflection in the mirror, and a spider is stealing the cherry out of her drink,” says Hause of the composite sketch and photo. “On the right is Lauren Hutton in a much more glamorous bar than we had originally envisioned.”

4. JIM CARREY HAS BEEN FASCINATED WITH VAMPIRES SINCE HE WAS A KID.

More specifically: Jim Carrey has fantasized about vampires since he was a kid, as he explained during an appearance on The Afternoon Show in 1985.

5. THE TITLE IS A REFERENCE TO AN OLD IDIOM.

Blood-sucking films without either "Dracula” or “Vampire” in the title often find other ways to reference their mythic subject matter (see 1983's The Hunger, 1987's Near Dark, or 2009's Thirst), but the filmmakers decided to go one step further with Once Bitten. An early version of the expression “once bitten, twice shy” is found in a 1484 translation of Aesop’s Fables by William Caxton. The translation reads “He that hath ben ones begyled by somme other ought to kepe hym wel fro(m) the same.” Hause tells mental_floss that at one point the title had an ellipsis: “At first it was Once Bitten..—dot, dot, dot—which was probably a setup for a sequel, but I guess it didn't work with the logo they created.”

6. MEGAN MULLALLY HAD A SMALL ROLE IN THE FILM.

After a couple of small TV roles early in her career and a bit part as a call girl in Risky Business (1983), the future Will & Grace star played “Suzette” in Once Bitten, the girl taking tickets at the school before the infamous dance-off between Mark’s girlfriend, Robin, and the Countess.

7. THE WOMAN WALKING A LION IN HOLLYWOOD AT NIGHT WAS NOT IN THE SCRIPT.

Jeffrey Hause writes on his blog that in making the film more commercial and keeping with the times, the studio hired someone to create a montage. “It was a big deal in the 1980s to have video montages in every film. And this film has a terrible one ... one thing they added—and don't ask me why—was the image of a supermodel walking a lion down Rodeo Drive. We had nothing to do with it.”

8. THE HOLLYWOOD SEEN ON SCREEN WAS ENTIRELY DIFFERENT THAN THE ONE IN THE ORIGINAL SCRIPT.

The writers intended for the film to show a much darker side of Hollywood. The head script reader for Goldwyn wrote in his notes that the project was hilarious, and that “the writers create a Fellini-esque vision of Hollywood that reeks not only of comic atmosphere but somehow captures and hyperbolizes our worst fears about the sleazy parts of town. It is a vision that balances precariously and triumphantly on a razor blade."

In an email interview with mental_floss, Hause shared the original title and direction of the film, and shared his thoughts on how the film turned out: “We had originally called it Nightlife, but Goldwyn didn't think it sounded like a comedy ... our draft really was about L.A. nightlife and trying to be a little creepier in tone.”

“I hope I don't come off as too mean-spirited or bitter on the website,” Hause continues. “I'm grateful and proud that the film was made and feel lucky to have worked with a true comedic genius like Jim Carrey ... I just have an idea of what it could have been (teens invading a vampire movie) instead of what it became (vampires invading a teen movie), but other people disagree and their opinions are just as valid as mine—thank God it was made at all!”